Sixty-five years ago Nurse Edith Shain was kissed by a sailor in Times Square and forever immortalized in that famous Life Magazine photograph. Edith moved to California and worked hard with “The Sprit of ’45” organization to get the Day of Remembrance official but did not live to see it happen. She passed just a few weeks before the first celebration.

Last Saturday Janet and I were happy to be a part of the newly dedicated national Day of Recognition for the veterans of WWII that will be an annual event held on the second Sunday of August.

The event we attended was sponsored by the Garden Grove Elks Lodge, promoted by our friend, PER Myles Kowalcyk. They were able to save the day when another venue fell through just weeks before the date! The event was financed by AMVETS Post #18, managed by Marching Through History and the Military Vehicle Preservation Association; all organizations that Janet and I are members of.

It was a “flashback” into time with many dressed in 40’s attire and military vehicles and cars from the 40’s.

There was a huge dance floor that looked far too big than was necessary until the 18 piece Bill Elliott Swing Dance Orchestra and the jitterbuggers started! The Lodge thought ahead and had jitterbug classes during the afternoon! Guests were the Lindy Hop Los Angeles group. The floor was full before the evening finished.

We were honored by the appearance of Medal of Honor recipient Army Lt. Walter Ehlers. You can just see the understated light blue ribbon of the MOH at his collar.

He said to us, “Liberty is worth fighting for, and sometimes worth dying for…I’m no Rambo.  Because of my training, it was just automatic not to run but to attack.”

Lt. Ehlers and his older brother Roland joined the Army at the same time. They were together in Europe and Lt. Ehlers was given the option to return home when the invasion of Normandy was being planned. He refused and the brothers were placed in separate units. Roland was killed at Omaha Beach. Lt. Ehlers said, “Roland and I were good buddies, he was always kind of looking out for me.  He was MY hero.”  Before the war ended, Lt. Ehlers had been injured three times.

Ehlers said that for him, the Spirit of ’45 was the beginning of a new era for the United States, although it was the result of fighting the enemies of the country from Japan, Italy and Germany. But, Ehlers said, the result of those fights also meant that those three countries are also now free democracies. “We’ve never fought a war for anything other than the idea of freedom,” said Ehlers, “they [soldiers] paid the price for freedom. 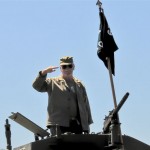 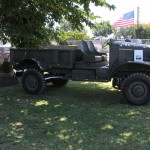 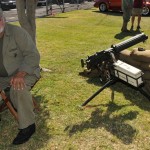 Demonstration how grenades are during battle

Fashions of the 40’s 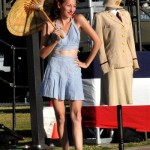 Fashions of the 40’s 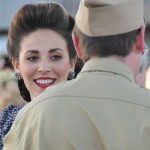 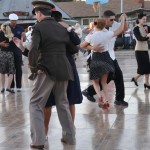